Louis and I spent 4 days backpacking through the southern portion of the Sequoia National Park during the 2011 labor day weekend. 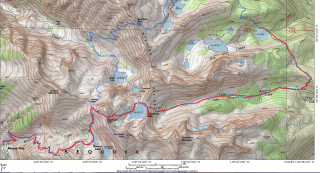 The entire trail loop is approximately 29 miles and elevation was about 11,000 ft above sea level. For those of you that are prone to altitude sickness, I would strongly recommend spending the night at the Cold Spring Campground near the ranger’s station to get acclimated to the elevation before hiking. We drove up to the trail head from Orange County the morning of the hike, the last 25 miles to trail head on Mineral Kings road is mostly unpaved and bumpy. The driving conditions got pretty brutal, it took us 1.5-2 hours to arrive at the ranger’s station. I would not recommend driving this road at night.

We arrived at trail head at 7AM in the morning waiting for the ranger’s office to open. Even though we made reservations for our permit, we still had to be at the ranger’s office when they opened to receive our permit. The rangers start giving away the permits to others without reservations. We drove to a designated parking lot once we received our permits. Marmots are prevalent around the area, we’ve heard horror stories of these animals climbing under the car and having a field day chewing on car wires. I was a little worried about my Protege, but in the end the Marmots stayed away. Below is a photo of us at the parking lot getting ready for our hike to Monarch Lakes. The elevation at the trail head was about 7800 feet.

Our destination for day 1 was to reach Monarch Lakes. It was a relatively easy and uneventful hike, but it gave us ample amount of time to get use to the elevation prior to our Sawtooth peak climb. The photo below is the lower Monarch Lakes, because it was a holiday weekend, many of the camp grounds at the lower lake were already taken. We decided to drop our packs and scramble to the top and were rewarded a much nicer and secluded upper Monarch Lake.

Photo below is the view of the upper Monarch Lake from inside our tent. The lake was filled with tiny fishes, Louis attempted at fishing but was not able to catch one large enough for us to eat. We spent the rest of the day starring enviously at the fishes in the lake while eating our tasteless dry foods. 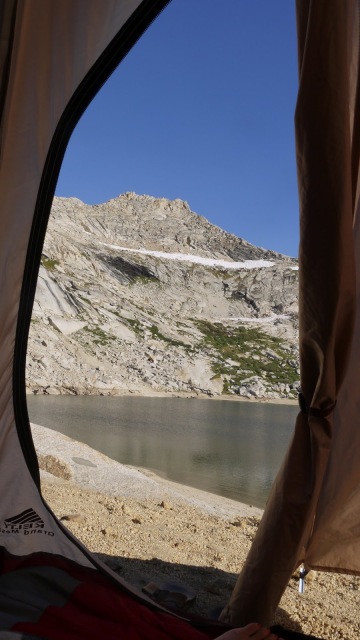 We rose early the next day and began our ascent to Sawtooth Pass. Below is the view from the valley on the way to the Sawtooth Pass ascend, we had no idea what we were getting ourselves into… 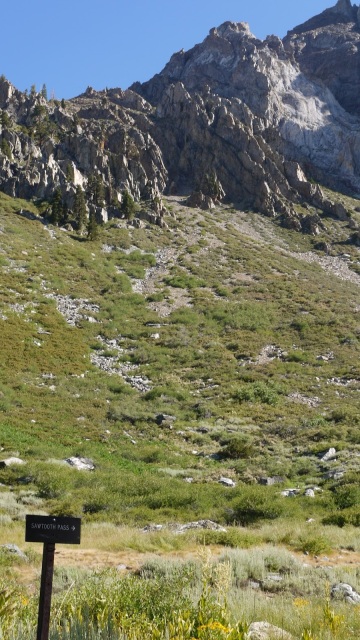 Climbing to the top of Sawtooth Pass was brutal. Every step we took going up the pass, the lose sand brought us back two steps. 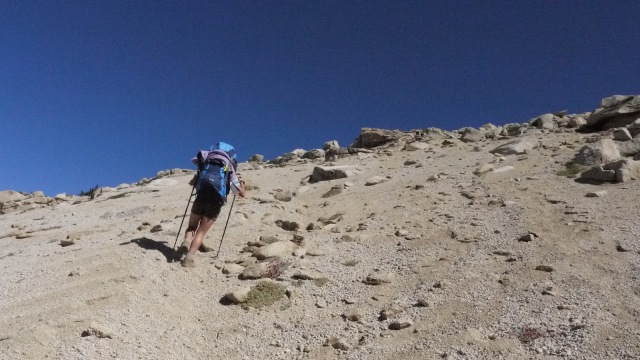 After what felt like hours of climbing, we reached the top. The lake below is one of the first Columbine Lakes. We are escatic to reach the top.

We found a secluded cove in the midst of the lakes and set up camp for night 2 and 3.

Our next door neighbor getting ready for winter. Look at how fat the Marmot is!!! 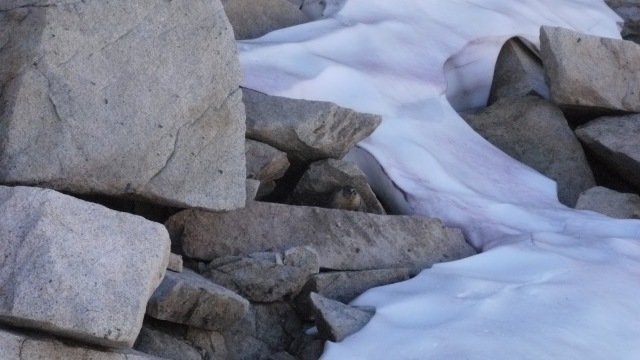 We decided to stay at Columbine Lake one more night and took a day hike to the Big Five Lakes the next day.

We arrived at the first of the Big Five Lakes around lunch time. Had lunch by the lake and then headed back to campground at Columbine Lake.

One our way back to the trail head, we decided to take a photo after descending from the Sawtooth Pass. Next time, we hope to complete the other half of the loop. 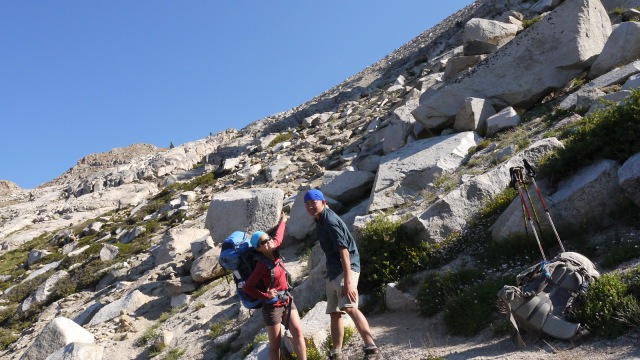