We left Orange County around 11AM enroute to Mojave National Preserve. We decided to take the 15 North route since we planned to work our way down the park and exit southbound. We made sure to fill up on gas at the Shell station right before we turned on to Cima Road. This is the last gas station on the northern part of Mojave as there are no gas stations inside the park.

Our first stop was the White Cross World War I Memorial site. There are two campsites at this site, we made a mental note that this would be a great place to stop in the future since this is so close to the 15N. 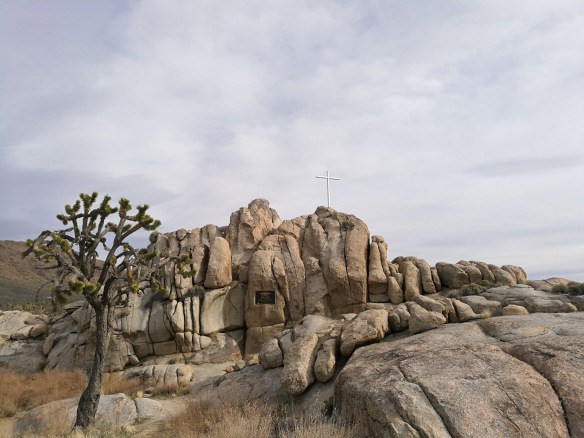 Thankfully, the ranger was kind enough to talk to us for a few minutes before he closed for the day. He informed us that there are plenty of roadside camp spots in Mojave and the best part of it all, it’s free! We were originally worried about not having a place to camp without advanced reservation but it was clear once we arrived at the park that this was not going to be a problem.

We found our first campsite on the Wild Rose Canyon Road near the ranger station. The campsite rested underneath the Cima Domes formed by recent volcanic activities. The campsite was nice and spacious, it could have actually fitted a few camper vans in the spot.

Roadside camping beneath the Cima Domes

After parking the van, we decided to take a walk around the campsite and take in the gorgeous sunset. We did not realize that the trail was filled with cactus spikes and after a few hundred yards, Dakota’s paws and legs were covered in it. We were kicking ourselves for not bringing her booties but were grateful we had tweezers with us to help pick out the spikes. We also realized the importance of inspecting our own shoes before entering the van. These spikes were really stubborn and they really hurt once they lodge themselves on your skin. 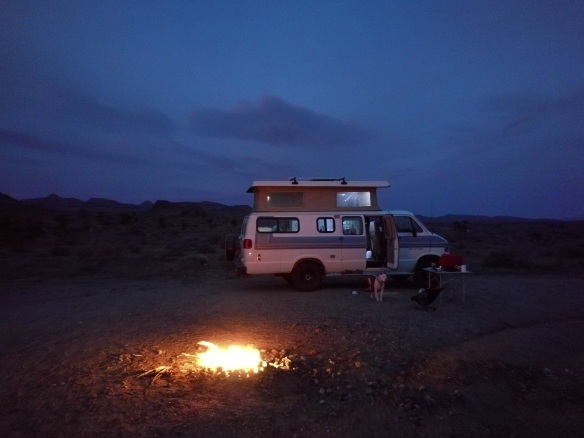 Camp site lit by the campfire

More photos from the day: 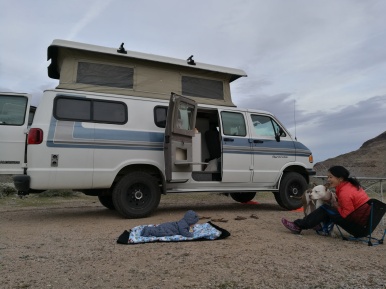 S playing outside on the desert floor

S out and about

Our first meal of the night