We arrived at the Kelso Depot Ranger Station around lunch time. This ranger station serves as the main headquarters of Mojave National Preserve. It looked much more established than the Hole in the Wall Ranger Station. In the early 1900s, Kelso Depot was a hotel and restaurant built to provide services for passengers of the railroads passing through the area. With the railroad industry declining after World War II, this area became desolate. The building was transferred to National Park Services in 1994 when the national preserve was established and the restoration of the building began in 2002.

Front of the Kelso Depot Building

We spoke to the ranger at Kelso Depot about where to camp for the night. He suggested a remote spot near the Cinder Cone Lava Bed. The drive to the lava bed and the lava tubes took about 30 minutes from the ranger station. From the ranger station, turn right onto Kelsobaker Road, set your odometer exactly 15 miles to avoid missing the turn off onto Aiken Road. The park map indicates four wheel drive (4WD) and high clearance vehicles are recommended on Aiken Road. Although we did not have a 4WD, our sportsmobile made it to the Lava Tubes just fine. There are some sandy patches on the road where you will need to maintain your speed in order to get through.

We were thankful that the hike to the lava tube from the trail head is only about 300-400 yards as it was a super windy afternoon. We bundled up Baby S and left Dakota in the van. It’s important to remember to bring a flashlight if you plan to go down to the lava tube, we forgot ours and thankfully had our phones to help navigate through the cave. 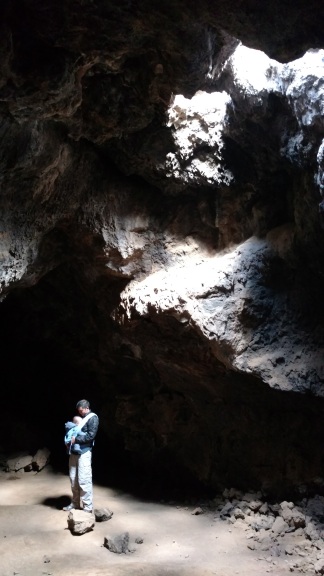 walking out of the cave 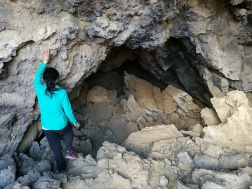 entrance of the lava tube

After visiting the lava tubes we drove back on Aiken Road and chose a campground in between the two cluster of the the Cinder Cones about 2 miles down the trail head. It is a flat campground underneath a cinder cone in the midst of the lava beds. It is our favorite campsite for the entire trip. Sunrise and sunset at this campsite was beautiful. 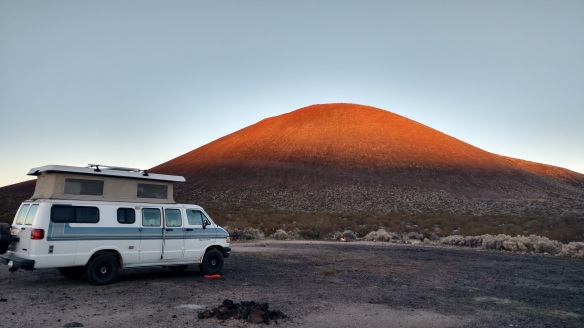 Sunrise at the campsite

Sunset at the campsite

We had the large campsite to ourselves that night. A few people stopped by to take photos and talk to us but no one stayed to camp. The winds were very strong at dusk, it flipped our entire picnic table with the Coleman stove on it when we tried to cook outside. We were especially grateful for our enclosed camper van that night. 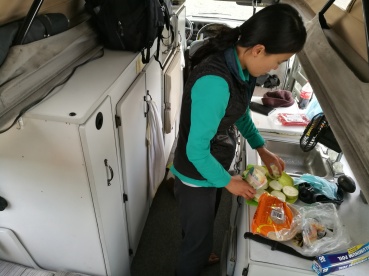 cooking inside the van 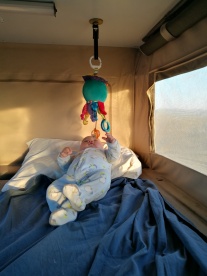 Baby S playing with his toy inside the van