It was another beautiful day out at the Mojave Desert as we woke up camping beneath the Granite Mountains. As usual, Baby S woke up at 6AM. We had breakfast and took our morning hike around the campsite trails. This schedule seems to work out for us since it coincides with Baby S’s nap time. We were sad that our stay at Mojave National Preserve has come to an end but were so grateful to have spent the last 3 days exploring this hugely understated park. We still cannot believe we stayed away from this place for so long! Mojave National Preserves has made its way into one of our favorite places.

Before leaving the preserve, we went back to Kelso Depot Ranger Station to fill up on water. The ranger had previously suggested for us to visit the Amboy Crater which was located 30 minutes south of the preserve. We decided to check out the crater before trying to find a campsite for the day. To reach the crater, we had to pass by the town of Amboy. Amboy used to be a quite a popular destination in the early 1900s due to its convenient location on Route 66 but the town deteriorated in the mid 1970s after the opening of Interstate 40 which bypassed the town. Currently, the only operating business in town is Roy’s. It is the first gas station we’ve seen since we entered the park off the Cima Road exit on interstate 15N.  Located on Route 66, Roy’s has become a land mark for visitors around the area. There was no food service at the diner when we were there but I believe it does still serve food on occasion. Gas at Roy’s was $5 a gallon which was two times the amount anywhere else.  We filled up 5 gallons and decided it was enough for us to make it to Twenty-nine Palms 60 miles away.

Amboy Crater is a relatively new volcano, the last eruption was 10,000 years ago. The crater is one of the most complete craters based on the way it erupted. The site is within the Mojave Trails National Monument and is overseen by Bureau of Land Management (BLM).

We were surprised at how new the amenities were at the Amboy Crater. The upgrades must have been done recently after the Mojave Trails National Monument was established by President Obama. There are nice picnic tables and pit toilet facilities at the front of the site but no running water is available. The hike to the crater is 4 miles round trip and dogs are allowed on this trail. The wild flowers are just starting to bloom, the vibrant colors against the black lava really made the flowers pop. 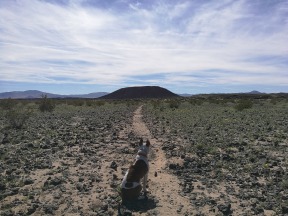 view of the crater from the beginning of the trail

The hike into the crater is about an 80 feet climb. Although it doesn’t look like much, it was pretty tough with a baby in tow. The toughest part of the hike was coming down from the top of the crater. It’s easy to lose your footing among the loose volcanic rocks scattered on the ground. 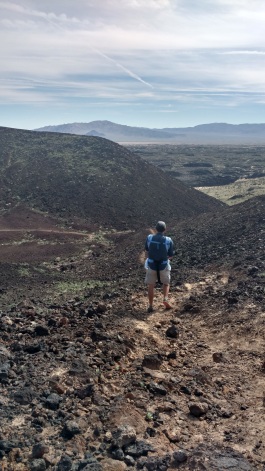 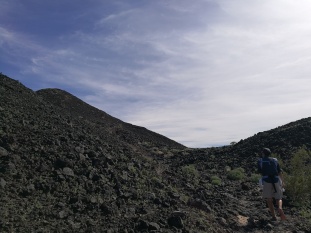 Climbing into the crater 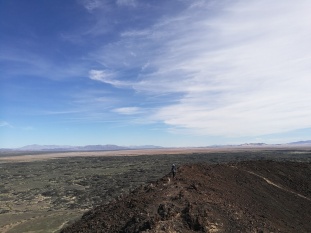 View inside the crater

Due to the proximity to the Air Force Base in Twentynine Palms, we also saw fueling exercises performed by cargo planes while walking on the trail. By the time we ended our hike, we were all drenched in sweat. This place is likely to get scorching hot in the summer, it is definitely recommended to come in the spring or fall when the weather is more manageable.