We woke up in Tokyo the next day and had a big breakfast before taking the JR train to Kyoto. The weather took a turn for the worse and it began raining hard early in the morning. Thankfully, the weather got better by the time we arrived in Kyoto.

The train ride from Shinagawa to Kyoto is a little over 2 hours. We are staying at Hotel Keihan Kyoto. It is a modest hotel at about $80 per night and it is within walking distance from the Kyoto station. We left our bags with the front desk and ventured out the a Kyoto for a place to eat lunch since we arrived much earlier than the check in time. We discovered a line of restaurants at the basement of the hotel we are staying at and each enjoyed a steamy bowl of udon for lunch, it was perfect rainy day food. 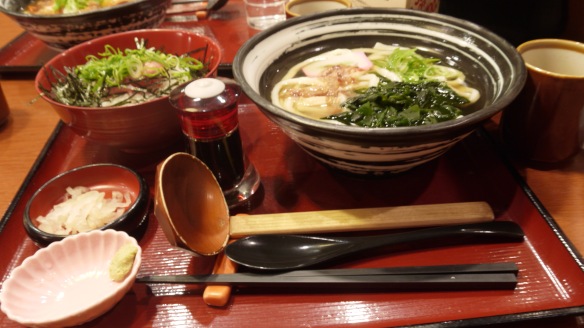 I had booked the a Kyoto Imperial palace tour prior to coming to Japan. The tour is English speaking and free to the general public as long as an advanced reservation is made. We took the subway from Kyoto’s train station to the station to the Imperial Palace, the fee was $2.40 since this subway system is not affiliated with our JR pass. The tour was crowded and it was difficult to hear the guide unless you are in the front. Most of the buildings has been rebuilt because of a huge fire. I was hopping to see inside the palace but this tour only consisted of the outside building structures.

Greeting space for guests inside the imperial palace

Entrance to the emperor’s house, visitors are not allowed inside the house. 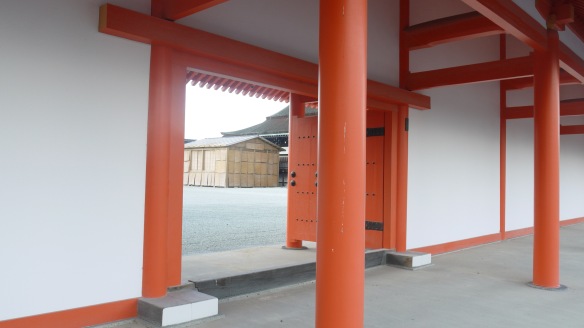 We decided to walk back after the tour to our hotel along the Main Street. It was a nice and long 5km walk but we got to see a little more of the modern Kyoto, cyclists are prevalent throughout the city and we tried to convince everyone we should rent bicycles the next day but was vetoed by a friend who had a traumatic biking experience in Europe.

We decided to have dinner at a local curry chain restaurant, CoCo curry. Our friend insisted the curry was better tasting than the Curry House restaurant back in California but I’m still skeptical.