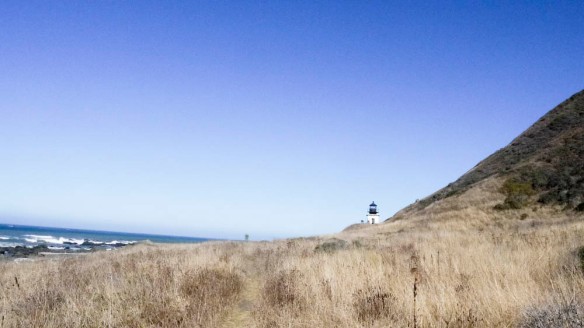 After the long hike on the previous day, we headed out early in the morning on day 2 towards Mattole Beach.  We packed all our gear and took it along for the final 2 mile stretch.  In hindsight, we should have just left our gear behind and hiked in with day packs.

There is a small section of the trail past the light house that must be hiked during low tide, and we needed to catch it on the way up and back from Mattole Beach. We reached the end of Mattole Beach around 8AM and it was very uneventful, with just a sign post and a large camp site.  We did run into a nice gentleman on the trail who gave us his extra lighter (which we subsequently returned when we found our lighter at Randall Creek). On our way back from Mattole Beach, we decided to take it slow.  Our plan was to cross Sea Lion Gulch towards Randall Creek at low tide later in the day.  We stopped by by the Punta Gorda light house and explore the area.

Old tanker on the beach

Along the trail, there are debri from old ship wrecks and trash.  The Ranger told us some of the debris may have been washing up from the tsunami that hit Japan in 2011. However, we are not sure if this has been officially verified.

There used to be three houses that accompanied the lighthouse. The foundations for the houses are still there, but the houses are long gone.  The lighthouse itself is run down.  The ladder and railing to the top is rusted and loose, climb at your own caution.

Climbing up to the lighthouse

We ran into the same group that lent us their lighter.  They stopped by the lighthouse to check out some sea lions playing and sun bathing.

We hiked just past our previous camp site and found a drift wood shelter.  The winds were picking up and we wanted to find a place to pitch our tent and take a nap. Around 3PM, we packed up and started heading towards Sea Lion Gulch.  We ran into two groups waiting to cross.  The tide was fairly low and we headed out around 3:30PM towards the old abandoned cabin.  Wind gusts picked up to about 50 MPH, tossing us around was we climbed above the buff tops.

We spent our afternoon resting before crossing Sea Lion Gulch

Later that afternoon, we were on top of Sea Lion Gulch scooping out the tide.

We hiked past Randall Creek and took a look at the camp sites in hopes of finding our lighter.  Low and behold, it was sitting there on the trail, untouched!

We kept hiking and picked an established camp site on the beach at Spanish Flats, just shy of Spanish Creek, probably the worse decision of the trip.  Wind gusts were strong and we didn’t have any natural barriers. The existing wind breaks were not working well as the winds were blowing from all directions. The soft sand made pitching the tent extremely difficult and we ended up using some flat rocks to support or tent poles. The night was dry and windy, but we settled in for the night and fell asleep.

Camping at Spanish Flats, it was windy that night!